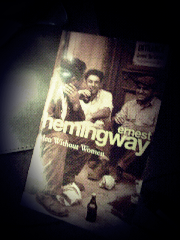 I'm all over the place at the minute and can't seem to stick to one book. I think sometimes, especially if you're in two minds about what book to pick up next, that a compilation of short stories can be really refreshing as you know you're not going to get a particularly heavy read. These thoughts in mind, this week I picked up Men Without Women, a book of 14 short stories.

If you haven't read Hemingway before, I cannot recommend his work enough. I know some people absolutely detest his writing, and state that the way he writes is too simplified and bland, and that his characters are shallow and vapid but ...I disagree.

He paints a scene like no other, and his characters have such untold grace and realness to them, they are not racing towards desperation like so many other characters written by writers of the same period.

Men Without Women consists of 14 stories, The Undefeated, In Another Country, Hills Like White Elephants, The Killers, Che Ti Dice La Patria?, Fifty Grand, A Simple Enquiry, Ten Indians, A Canary For One, An Alpine Idyll, A Pursuit Race, Today Is Friday, Banal Story and Now I Lay Me.

My personal favourites are Hills Like White Elephants and Now I lay me. Such simple little narratives but still not something you passively skip over. Then again I'd probably wax poetic about anything Hemingway has written. Hills is about a man, referred to as "The American" and a girl he is with. They  are drinking at a cafe while waiting for a train to Madrid and talking about an operation. Though it's not said, we assume they are talking about an abortion. I don't know why I like this story, I think it's because it doesn't really seem like a short story at all. So much is said within those 5 pages that we feel we've read a longer piece.

Now I Lay Me is about Nick, (a character thought to be Hemingway himself who is used in many of his stories.) a Soldier suffering from Shell Shock. Nick believes that when an explosion happened near him in the war, his soul left his body briefly. He is now scared to sleep because he thinks he will loose his soul.

"I had been living for a long time with the knowledge that if I ever shut my eyes in the dark and let myself go, my soul would go out of my body."

Consequently, the rest of the story focuses on Nick trying to stay awake at nights, through the stream of consciousness writing we go through this process with him and see his past, his future and his prayers. I just, again, like the simplicity of the story and the complexity of the character. Something else I love about Hemingway is the way he ends things. He doesn't make big conclusions, they just simply finish. 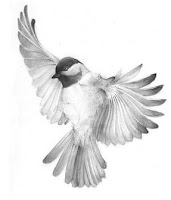