The Great Gatsby - Thoughts On The Film

I wrote a review of this novel way back last year (which you can read here) where I said that the Luhrmann Adaptation was to be released (last) December - Boy did they move that date! It came out here on Thursday and on Friday to celebrate the end of my degree I went to see it - in 3D no less!

First off I'll just say that I hate Toby Maguire  can not stand him in anything, so this film was always going to be a challenge for me as he is cast as the protagonist Nick Carraway, and...he wasn't good, I'm sorry if you're a fan, but really his confusion and awkwardness throughout just made him so unnatural to me. I know Nick was the perpetual outsider in the novel but, ugh, I don't know, I just felt like he was there only to support Jay and Daisy, whereas in the book, that's the first feeling you get, but then Nick becomes a main character in his own right through his way of thinking and his calm understanding. I know that it's hard to turn that kind of character into someone big on-screen, but Luhrmann found a way to convey Nicks thinking through his typing up his memoirs, and he still wasn't believable for me. I just think different casting could have improved the film so much, in terms of Nick anyway. 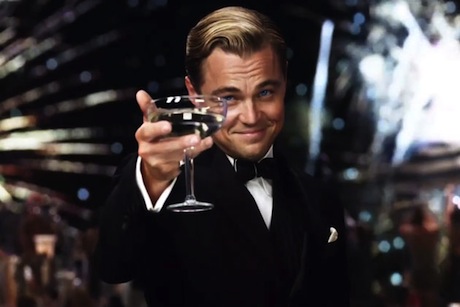 Leonardo Dicaprio as Jay Gatsby, was pretty darn perfect. I didn't think anyone could get away with saying "old sport" so many times in 140 minutes, but he did! And he did it without being repetitive which is surely enough to merit praise in it's own right. For me, Dicaprio just nailed the act of the cool slick city gentleman, simmering with desire and complicated thoughts under the surface. Within his mysterious first few half appearances, you just knew the character was going to be the man you'd read about - and that's all I wanted. I also really loved the way Luhrmann kept taking us back to that green light and cementing in that hope that kept Gatsby going, it was such a nice way to implement his desire without giving him unnecessary dialogue or making him in anyway un-Gatsby through thoughtful monologues or anything twee like that.

Daisy was Daisy. Carey Mulligan played her well enough but she always was the least important character in the novel, it was Gatsby's infatuation of her that was important, not really the character herself.

The other lead females did well enough though Elizabeth Debicki was just beautiful as Jordan Baker, but she kind of lacked that spunkiness from the novel that makes her so memorable.
Isla Fisher as Myrtle was quite despicable as she should be, but again lacking. I think it's because so much was missing, smaller story lines were taken out so that the film could focus on this "bromance" between Carraway and Gatsby, which to me was not even one of the most important themes from the novel. I know that books are not always one sided and we each take from them what we will, but I just don't know what made Luhrmann and Craig Pearce, who was the other screenwriter, take this friendship to be the most important thing to show on screen.

Not that all of this means I didn't enjoy the film; far from it, it was good, it just wasn't a great adaptation. Probably the best thing about this film is just watching it, because Luhrmann as many know makes theatre production of films, and what better show to put on then one of the American Dream - the books ultimate theme. This gorgeous setting of a changing city free from prohibition and out to loose morals have a damn good time was just perfect for him to blow up on the big screen. The film truly is a visual delight, and especially in 3D, where you truly feel the magnificent splendour of a Gatsby Party. Another great thing about Luhrmann is the way he mixes modern music into these tales of long ago, (I'm sure we all remember Romeo's entrance to Radiohead's Talk Show Host *shivers*) and this is done well in Gatsby. The soundtrack is on-point and makes you wonder what else could possibly of been played during Gatsby's parties if not Beyonce overs or Kanye West.

Go and see this film, see it if you haven;t read the book and you'll probably come away more satisfied than if you have, but even then, it's still worth a watch just t better imaging that world where men and girls came and went like moths among the whisperings and the champagne and the stars.