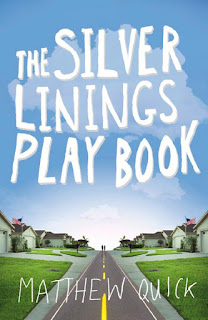 I saw the adaptation of this book at the cinemas a while back and bought the book not long after. I started reading but ran out of steam about halfway through and put it back on the shelf, not starting again until a few days ago when I quickly got through it.

The Silver Linings Playbook is the story of Pat Peoples, a thirty something man who is just being released from a mental institution into his parents care as the novel begins. Pat is in the institution for a breakdown of mental health resulting from the dissolution of his marriage to College sweetheart Nikki. Pat and Nikki are having "apart time", a time for Pat to work on his body and mind so that he will be a better husband to Nikki once "apart time" is over, Pat's way of justifying a restraining order. While in the care of his anxious mother and stone-faced, sports obsessed father, Pat meets Tiffany - a similarly aged divorcee. Pat has a kinship with Tiffany who is also thought of as mentally unstable, and the two find a solace in one another that they cannot seem to get from other relationships. This is basically a story of recovery and discovery, letting go of the past and learning to see the silver linings in life, no matter how unlikely they may be.

The book is nothing like the film really, so if you weren't impressed by the adaptation please give the book a chance. In the book Pat reads Plath's Bell Jar which he at first is annoyed by and does not understand, but I see this book as a sort of modern, male version. Though it's not a memoir, and by all accounts not based on anything "real life", Pat's journey really does seem honest and like Pat says about "Esther" when he reads the book, he just wants to comfort her; that's what he ends up taking from it, and that's a very similar feeling to the one I got from his character.

I loved the style of writing, and being tied to Patrick and his emotions. There was a huge sense of things being hidden from him by the other characters and they were hidden from us too - the journey of this novel was a great one because we were so in-tuned to the protagonist in this way.

This is Quick's first novel which I think explains the very slightly "scattered" feeling of the narrative, but considering the subject matter I think this actually works really well and is probably one of the reasons the book was published. To me anyway, this is one of those rare books that deal with mental disorders that don't sound like they are coming from a "now-healed" mind, rather it's like we're seeing Patrick's world as he really feels and observes it during his recovery.