Not at all what I was expecting from this little book! I took this to Uni with me the other day as I had a late afternoon tutorial and a few hours to kill after an earlier meeting. I managed to get about 3/4 of this finished in that few hours, and read the rest in about half an hour at home, so a short read, but quite a good one.


So Girl, Interrupted isn't a novel, but more of a memoir of author Susanna Kaysen's time in McLean Hospital in the late 60's. McLean is a psychiatric hospital which boasts a list of several well known previous residents such as Sylvia Plath, and Ray Charles. Kaysen began having recollections of her time at the hospital while writing another of her novels, and then began researching her time there. Her findings and memories are the basis for the book.

Something I really like is that there are copies of Kaysen's files from the hospital in the book, which is of course proof that she was there, but also really solidifies the horror of her situation.

Kaysen herself was admitted for a "Borderline Personality Disorder" which is as broad as it sounds, and basically something that allowed girls who really needed simpler help to be institutionalised. Other girls on her ward are there for reasons spanning from eating disorders, to promiscuity. One thing his book really does is make you appreciate the world we live in now. These days, you can sleep with more than three people without being locked away, you can openly discuss your problems with family, friends, charities or even doctors, without the fear of either being deemed a social pariah, or locked away. I think that's why I'd say this is a rather important book, for girls of a certain age especially, because Kaysen really goes into depth in terms of her thoughts and feelings, what she thought made her "crazy",  but are really just (mostly) normal thoughts we all go through at that point of growing up and choosing our own path, sadly for Kaysen, bringing these thoughts up landed her in McLean, but today, something as simple as knowing someone else has gone through what you have is help enough. 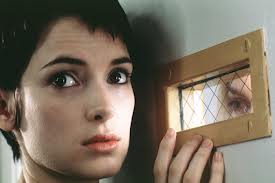 I know a lot of people have seen the film adaptation of the same name and though I think it's a really great film, the book is very different and a little deeper. The character of Lisa, played by Angelina Jolie in the film, is really different, as is Brittany Murphey's character Daisy. There is also a kind of switch up of the happy ending. In the book, Kaysen (played by Winona Ryder) is deemed "cured" and leaves the institution, but all of the other girls stay helplessly inside. In the book there's a little more resolution with the characters and of course with Kaysen herself, as she clearly has been successful and is now a writer.

Like I said, I feel it's quite an important read, so pick it up if you can. For girls, I think this is definitely a great coming of age that is almost on par with The Bell Jar. Happy Reading!