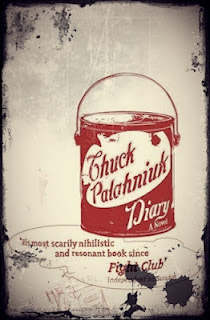 I know I posted a review on Fight Club where I stated that as my favourite Palahniuk novel, but Diary only just missed out on that top spot. I love that Palahniuk writes both male and female lead protagonist characters, not that that's unheard of, of course, it's just that he writes both sexes so believably. I never doubt his characters.

“It's so hard to forget pain, but it's even harder to remember sweetness. We have no scar to show for happiness. We learn so little from peace.”

Diary is about a woman, Misty, whose husband Peter is in a coma after attempting suicide. He becomes her life size voodoo doll as she spends her time at his bedside stabbing him with pins to see if he will respond, though this isn't done maliciously. They live in Peters home town, the seaside idyll of Waytansea Island (I do love a good pun...) Back when she was in College, before Misty became Peters wife, she was studying art but gave it up to be a mother to her daughter Tabbi, trading her paintbrush for a waitress's notepad in the Hotel where she works as her husband works building houses.

After Peter enters his coma, Misty begins to receive complaints from her Husbands clients. She discovers that he had been building secret rooms into the houses he has constructed and covering the hidden walls in graffiti...

“Just for the record, the weather today is partly suspicious with chances of betrayal.”

While immersed in the mystery of her comatose husbands hidden rooms, Peters mother begins encouraging Misty to paint again, and sadly she gets her wish when Misty is thrown into a tumult of emotions she can only expel through her art when Tabbi accidentally drowns in the sea below the Hotel. Misty throws herself into her art. It is all she thinks about and soon an exhibit is announced to showcase her paintings for the town in the Hotel. 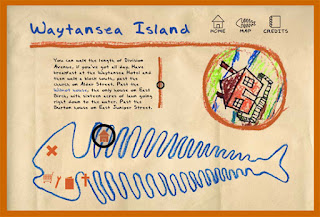 Spoiler Alert! I don't normally reveal an entire plot when I review a book, but, just this once...I'm breaking the rules, so if you want to find out what happens in Diary by yourself, stop reading now!

However...There is a much darker side to this story. We discover that Misty's entire life has been a plan conjured by the residents of the island. Every four generations a young man from the island leaves to find a wife. The young woman he finds must fit one condition; she must be attracted to an item of jewellery given to her by the young man. The residents believe these items of jewellery which attract the women, belonged to them in previous lives, and so they are in a way, controlled by their desire to have them again.
Once married they must return to Waytansea and have children. The husband will later die, as will the child/ren, pushing the mother into a creative flourish in which they will produce items to attract tourists to the Hotel. Complicated? It's not over yet...Once the tourists are attracted by the works produced they will be trapped inside the Hotel and killed, in Diary's case, by a fire. The residents of the island then claim a huge insurance for the lives and live in luxury until it is time for the cycle to repeat. I won't completely reveal the plot here because things to change slightly in Misty's case, so the above isn't exactly what happens, I just had to write about it so I could talk about my favourite part of the book, Stendhal Syndrome.

Stendhal syndrome is defined as:

"A psychosomatic illness that causes rapid heartbeat, dizziness, fainting, confusion and even hallucinations when an individual is exposed to art, usually when the art is particularly beautiful or a large amount of art is in a single place. The term can also be used to describe a similar reaction to a surfeit of choice in other circumstances, e.g. when confronted with immense beauty in the natural world."

and it is hands down one of the best things I've ever read. I love that this syndrome exists, reading about it in Diary, (as it's what's said to hold the tourists in the room with the art even though it's burning) is the first I've ever heard of it, but since I've researched it quite a lot because it's just such a beautiful idea. I can't really describe why I like the idea of this syndrome or why I felt the need to include it in this post, but I think it's because I don't just see art as paintings, I see it in everything creative, whether it be a poem, a novel or a song and this brief description above describes so well what I feel when I experience art that I just felt I had to share it.

Diary is written via a 3rd persons perspective so we don't necessarily feel like an integral part of the story as a reader, but I'd define Diary as a mystery, in which case I think it's the norm to be on the fringes of the story, though we are still shown Misty's thoughts. I also class this as a sort of love story too, though not Hollywood love, more Palahniuks brand of truthful, realistic tenderness. As I said, this is a favourite of mine from this author so I absolutely recommend you pick it up, it's one of the best written novels I own. I think it would absolutely appeal to all ages, and maybe more so if you're a reader looking to get into this kind of transgressive genre as I think it would be a great gateway novel.