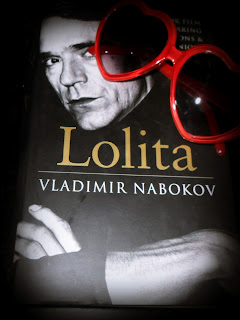 Lolita....Lolita is an odd one. The book is about a paedophile, and with that word I think the majority of people get an image in their minds on how to perceive a character; We are prepared to villainize. Yet strangely, I don't think I really villainized Humbert at any point while reading this. He becomes a very desperate and likeable character, plus with the way she acts it is very easy to forget Dolores' age. This is such a testament to Nabokov's writing, that he can make a reader like such a character as Humbert.

Humbert has an obsession with young girls which stems from the death of his childhood sweetheart. He moves to America after a divorce and rents a room in Charlotte Haze's suburban house. Charlotte is rather taken with Humbert and flirts outright, unaware that Humberts attentions are drawn to Charlotte's 11 year old daughter Dolores, who in Humberts mind becomes Dolly, Dolly-Lo, and when she is at her most alluring, Lolita.

Unfortunately for Humbert, Dolores is sent to summer camp just as he is making "progress" towards his desired intimate relationship. Once she is gone, Charlotte reveals her love for Humbert and asks that he either love her back or leave her house. Unwilling to leave the place his Lolita will return to, he marries Charlotte. Things plod along in typical small town american life, much to Humberts dismay. He is soon entertaining thoughts on how to "dispose" of his new wife, leaving him alone to parent Dolores. Charlotte however discovers his lascivious intentions towards her daughter and in a rush to warn her daughter is hit by a car and killed, taking Humberts secret love for her daughter with her.

Humbert leaves to pick up Dolores from camp, where he tells her that her mother is still alive and in hospital. The two then embark on a journey in which Dolores finally becomes Humberts "Lolita" and he falls desperately in love with her.


"Lolita, light of my life, fire of my loins. My sin, my soul. Lo-lee-ta: the tip of the tongue taking a trip of three steps down the palate to tap, at three, on the teeth. Lo. Lee. Ta. She was Lo, plain Lo, in the morning, standing four feet ten in one sock. She was Lola in slacks. She was Dolly at school. She was Dolores on the dotted line. But in my arms she was always Lolita. Did she have a precursor? She did, indeed she did. In point of fact, there might have been no Lolita at all had I not loved, one summer, an initial girl-child. In a princedom by the sea."

Though some of the scenes describing sex can be difficult to read if you remember the characters ages and the fact that Dolores is being abused, you often don't even notice it is sex that's occurring. Nabokov writes in a very poetic dreamlike prose and describes his fantasies as much as reality. I really don't think I found myself offended once. The book is written as a set of fictional memoirs, and even has a foreward and meta-fiction, yet even this attempt to make the novel as real and factual as possible doesn't effect my response to Humberts character.


"Through the darkness and the tender trees we could see the arabesques of lighted windows which, touched up by the coloured inks of sensitive memory, appear to me now like playing cards-presumably because a bridge game was keeping the enemy busy. She trembled and twitched as I kissed the corner of her parted lips and the hot lobe of her ear. A cluster of stars palely glowed above us, between the silhouettes of long thin leaves; that vibrant sky seemed as naked as she was under her light frock. I saw her face in the sky, strangely distinct as if it emitted a faint radiance of its own. Her legs, her lovely live legs, were not too close together, and when my hand located what it sought, a dreamy and eerie expression, half pleasure, half-pain, came over those childish features."

I think a reason we don't make Humbert a villain is that the book is a big criticism on pop culture and the modern world ageing young girls so quickly so that they don't really have as much of a childhood any more, Lolita being that main criticism, She is aged so much by music, movies and (then) current fashions that she's not seen as much of a child despite her age. Lolita was banned and censored when it was first released in the 50's but I feel as time moves on the book has become so much more acceptable because of this lack of childhood, which has become so much more common in more recent years. Perhaps that's why I don't despise Humbert, because I have grow up in the 20th century where the sexualisation of women seems to be targeting a younger and younger age each year.

I do really recommend that people read this if they haven't and I'd also really like to hear your opinions on it, What do you think of Humbert?