A few weeks ago I posted a mini haul where I mentioned that I had picked this up. Lovely Bookworm Belle mentioned that she had read The Reader in 6 hours one night, and, well there must just be an "unputdownable" quality about this book, because it took me just one sitting too! 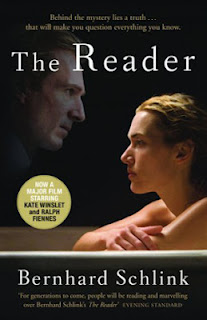 I had seen the film adaptation beforehand so the story wasn't ever going to be a shock to me (it's very true to the books narrative) but I really enjoyed reading it nonetheless.

Setting is extremely important in The Reader, in fact Germany can almost be seen as a character in itself due to it's importance in the narrative. The book is written in first person, which I do tend to read more often, and from the point of view of the main protagonist Michael Berg. The story begins when Michael is just 15, where he begins an affair with an older woman, Hanna Schmitz. The first part of the novel describes their relationship, which is largely based around sex, and Michael reading novels aloud to Hanna.


“I asked her about life, and it was as if she rummaged around in a dusty chest to get me the answers.”

The second part of the novel briefly details Michael's formative years, and his taking a university law class leading him to attend a criminal trial of women who worked as guards at Nazi concentration camps. He quickly realises that Hanna is one of the accused, and the rest of the novel describes Hanna's history as it comes out on the trial, including that she attributed to the death of many, and is illiterate, which makes her crimes more understandable, but not any less harming or terrible.

“The tectonic layers of our lives rest so tightly one on top of the other that we always come up against earlier events in later ones, not as matter that has been fully formed and pushed aside, but absolutely present and alive. I understand this. Nonetheless, I sometimes find it hard to bear.”

Bernherd Schlink's main profession is that of a Law Professor  which is what gives the writing it's authentic feel, but also perhaps what gives it a slight coldness. I say that because at first glance The Reader is a love story, and when looking at the book as a love story we do feel very detached as readers from any real passion or particularly ardourous feelings. At it's bones however the story goes so much deeper than love, it's a story about humanity, how times can change us, and how the world adapts.

“I had loved her. I tried to tell myself that I had known nothing of what she had done when I chose her. I tried to talk myself into the state of innocence in which children love their parents. But love of our parents is the only love for which we are not responsible. ...And perhaps we are responsible even for the love we feel for our parents.”

There are two parts of the book which I liked in particular; The first being Michael's realisation of Hanna's illiteracy. I think it could have been very easy at this point for Schlink to create a Hollywood ending: Hanna didn't know what she was doing was wrong, all is swept under the rug and she will fall with hopeless devotion into Michael's loving arms. Instead he gives her the little leniency the realisation deserves given the circumstance, he uses the illiteracy as a tool to pull his narrative together, rather than a justification.

The second part of the book I particularly enjoyed was Michael's tour of the closed concentration camp, because again there was nothing Hollywood about it, no statistics or tears, and not because the scene wasn't sad, but because we all know how terrible those places were and what horrifying things happened there, he doesn't need to use those facts as a crutch to make his story something worthwhile.

“So I was still guilty. And if I was not guilty because one cannot be guilty of betraying a criminal, then I was guilty of having loved a criminal.”

If you consider yourself a person who's perhaps not interested in the war genre, then I'd say The Reader may change your mind; it's so easy to read but has a real impact and considers the after effects of war rather than the action of war itself, which may appeal to those who don't like to read action. I personally love history and loved this book, it wasn't pushing facts or preaching the authors beliefs on right and wrong, it's a commentary on human nature, and other sides to the horror of World War Two; the average teenage boy growing up in a shamed post war Germany, and the guards who put so many lives into torment at the orders of their country. I'd definitely recommend this book, it's a great read.