Into The Wild - Jon Krakauer 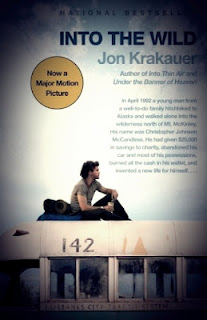 Into The Wild, though written by Jon Krakauer is about a young man named Christopher McCandless. The book originated as an essay Krakauer wrote for Outside magazine entitled "Death of an Innocent". Though I'm really not a sports fan in the slightest, I do have a thing for these non-fiction books about men embarking on sporting adventures, such as this and 127 hours. I'm not normally a non-fiction reader, in fact I could probably count on one hand the non-fiction books I actually own, but I really, really do love Into The Wild.

It reminds me so much of On The Road, because Christopher, so like Dean Moriarty is travelling the road on the search for something...more. He doesn't know what he's looking for, but it's more than an average life. The brief blurb on the front of the book reads:

"In April 1992, a young man from a well-to-do family hitchhiked to Alaska and walked alone into the wilderness north of Mt. McKinley. His name was Christopher Johnson McCandless. He had given $25,000 in savings to charity, abandoned his car and most of his possessions, burnt all the cash in his wallet, and invented a new life for himself..."

“The joy of life comes from our encounters with new experiences, and hence there is no greater joy than to have an endlessly changing horizon, for each day to have a new and different sun.”

But that is just the beginning of the story. McCandless travels through America, climbing and hiking. On his travels he adopts the name "Alexander Supertramp" and meets several people who become huge characters in the book and who Christopher forms real attachments to. My favourite parts are the connections he forms with other people on his travels which show him to be a genuine and likeable person and also the ending where he is so sadly betrayed by his own want of self sustainability.

This is another one of those books I really don't want to write too much about, even though we find out McCandless's fate within the first two sentences of the book, because It's just such a beautiful thought provoking read and I think it should be experienced first hand.


"Happiness is only real when shared."

The book has also been adapted into a fantastic film by Sean Penn, with Emile Hirsch starring as McCandless, very much worth a watch, but I wholly recommend the book to all.