It starts with a favourite - Fight Club, Chuck Palahniuk. 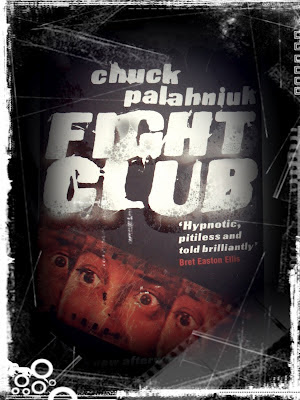 Looking at my bookshelves it wasn't hard to pick one "old favourite" which I could just talk on and on about without re-reading then and there, I bought this book when I was around 15 and I haven't been able to pass a Palahniuk by since. His books are just exactly what I look for, strong characters, interesting story lines, and above all absolutely beautiful prose. Palahniuk describes the book as

" The Great Gatsby, updated a little. It was 'apostolic' fiction - where a surviving apostle tells the story of his hero. There are two men and a woman. And one man, the hero, is shot to death. It was a classic, ancient romance but updated to compete with the espresso machine and ESPN."

So, if you haven't read the book, It's written from the point of view of a 20-something year old man who lives alone and works in the car insurance business. He has no friends or family and his lack of an identity is mirrored in his lack of a name.

A lot of people have different interpenetrations of what Palahniuk was trying to do with Fight Club; create a modern satire of consumerism, bring back the age old theory of what a "man" should be, encourage violence etc...but I think that the story is trying to convince us that love can exist in a modern word exempt from all the Hollywood nonsense that we have come to expect from a "love story". Granted certain parts of the modern world Palahniuk presents us with are glorified, but the bones of the story come back to what we know, this is certainly not a tale of hearts and flowers romance, it is not a happily ever after, shiny, pretty-Disney tale. In that way, the story doesn't really fit into what we come to expect from a love story, but instead fits into a more realistic version, simply: boy meets girl. boy wants to be more like girl. boy alters his world. boy gets girl.

The character of The Narrator is one of my favourite protagonists of all time. The way Palahniuk writes him, in his informal style and repetition and quoting of other characters, namely Tyler Durden makes his lack of self worth and quiet desperation so apparent, the informal simplicity of his writing is completely clear and original.


"It's only after you've lost everything," Tyler says, "that you're free to do anything."

Life seems to begin for The Narrator when he meets a girl at a support group for testicular cancer, which he (perfectly healthy) goes to in order to feel real emotion. Searching for another let for his emotions, as the support groups no longer work with another "faker" present (Marla) the character embarks on a path to self destruction with new friend Tyler Durden. They invent "Fight Club" in which men get together to, you guessed it, beat the crap out of each other for catharsis. The protagonist is at peace with his new form of release. Tyler, however wants destruction and freedom which he plans to achieve with a new idea; "Project Mayhem". The narrator disjointedly attempts to stop Tyler's plans for this which culminates in Palahniuk's "hidden gun".

In meeting the girl, Marla Singer, The characters life spins out of his carefully crafted control. In the book he tells Marla, "You met me at a very strange time in my life" but it was meeting Marla which caused the changes and created Tyler. I love that if you strip away all the craziness and the fights and the bombs...Fight Club is a story about a man who totally realigns his way of life and thought just so he can be with a girl, this is at it's core a love story. Marla is free in a way that the narrator is not and upon first realising this he creates another persona, one who could feasibly be with a girl like Marla. He can't be with her the way he is, invite her over to his place to sit on his Swedish design strine green stripe pattern sofa unit and eat dinner with him from his glass plates with the tiny imperfections, she just wouldn't fit in that world, so he creates a new one, one with power cuts every time it rains, bloodstained shirts, cut lips, bruises, desperation and self loathing. He blows up his condo as an excuse to talk to her, but when he picks up the phone he's not yet ready for her to be part of his life, he still has so much more control to loose, so instead he calls new acquaintance Tyler Durden.


I just really can't fault this book whatsoever and it in reading it and becoming familiar with Palahniuk's work I just got involved in so many other authors work which I just would not have come across otherwise. If you haven't read this book...do.