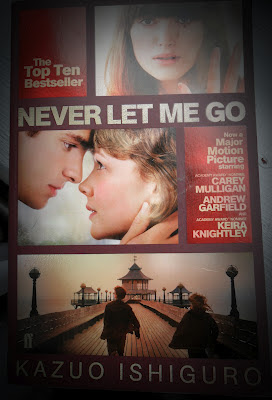 I should probably start this by saying that I watched the film adaptation of this story before reading the book and I think that's why I have problems with it. I imagine that if you had no information about the story before hand, this book would be a lot more interesting as you'd experience the "big reveal" and that would spur you on a while so you maybe wouldn't notice how dull the rest of the book actually is.

Never Let Me Go is described as a love story but I really can't see it fitting into that genre at all as I really could not care less about any of the characters, I felt nothing for them; there is no passion, in the characters actions or in the writers language. I feel the book would be more suited to a label of Science Fiction, where the emotionless characters would perhaps be less of a problem to the genre.

Without giving too much away, the story is about a kind of love triangle between 3 students from a boarding school somewhere in England. But as the children grow up we discover that they are not "normal" and that an unkind fate awaits them in their futures. Now this description itself, I like. It sounds new, interesting and generally like something I'd love to read. The book itself however is just so problematic.

We read the book from the point of view of Kathy, a student at the school while she grows up, leaves the school and becomes an adult. It's as if she is noting down her memories, from childhood to the current  moment, but the way we read her life is just so unbelievably jolting and disjointed that you never really feel fully emerged in the story. I think you really have to be on the lookout for the links between the disjointed story aspects otherwise you miss them completely and parts of the book become totally pointless, (not that noticing the links makes the book any more enjoyable).

A big plot point in the story is that some of the guardians of this boarding school want to prove certain things about the students, therefore the children must submit varied types of artwork; poems, drawings, paintings etc, a few times a year so that the guardians can attempt to show that they posses creativity. I've never read any of Ishiguro's other work so I don't know if what I'm saying here is right or if he's just a terrible author but in my opinion there is absolutely no depth to the story whatsoever and I think he does this because it's written from the point of view of Kathy and through his point of view of her he's able to show that she doesn't feel things like a regular human, she is an extremely detached character and reading from her bland, shallow point of view is just so unbelievably tedious. I think in doing this, Ishiguro's trying to distance the reader from the story, try to make us not feel as much for the characters, as their reactions are so abnormal but I think it backfires so terribly!

The story did gather a little more speed within the last 10 or so pages, though that may just of been because I was so relieved to be finishing it. One redeeming feature is that some of the language (occasionally) passes for well written;


"for a moment, it seemed like we were holding onto each other because that was the only way to stop us being swept away into the night."

I'm very unsure of what Ishiguro was trying to accomplish with this work. From my point of view it's a take on how unforgivable people can be when confronted with something they don't understand, and maybe that the human race is ruthless when it comes to self improvement, we all have that peter pan wish of immortality and youth and i suppose this can be seen as a criticism on that.

Overall, Never Let Me Go was a chore to read, and as emotionless as the characters inside. I would't recommend it to anyone.