We Need To Talk About Kevin - Lionel Shriver 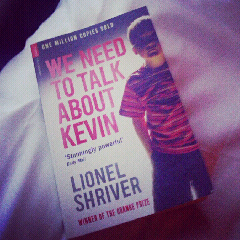 "Okay it's like this. You wake up, you watch TV, and you get in the car and you listen to the radio. You go to your little job or your little school, but you're not going to hear about that on the 6:00 news, since guess what. Nothing is really happening. You read the paper, or if you're into that sort of thing you read a book, which is just the same as watching only even more boring. You watch TV all night, or maybe you go out so you can watch a movie, and maybe you'll get a phone call so you can tell your friends what you've been watching. And you know, it's got so bad that I've started to notice, the people on TV? Inside the TV? Half the time they're watching TV....."
"All these people, Marlin." He invited the interviewer in with a nod. "What are they watching?"
After an awkward silence, Marlin filled in, "You tell us, Kevin."

Okaaayyy. This book is hands down one of the best modern "product of our time" novels I have ever read. It's currently 9.04 in the morning and I've forgone sleep for the night to finish this.

First selling point: the absolutley captivating language which is neither stark nor overdone - rather just enough that as you first begin reading you need to stop; take a breath, and start again with your full attention intact. Shrivers way of describing the menial with so much passion in terms of her own stylistic writing choices rather than what eminates from the protagonist character herself is just...beautiful, theres really no other way for me to put it; her words have the capibility to take my breath away, though her language is as honest as it is beautiful. I've never been one to shy away from the abject in literature and finding an author who depicts it at all without looking for a cheaply written shock factor is certainly something, but Shriver had a way of using the abject to flesh out her characters even more (she truly writes some of the most realistic characters i've ever read);


"In truth, we are bigger, greedier versions of the same eating, shitting, rutting ruck, hell-bent on disguising from somebody, if only a three-year-old, that pretty much all we do is eat and shit and ruck. The secret is there is no secret."


Though the story itself is sometimes difficult to read, (near the end I found my self in tears after discovering perhaps the crulest moment) thats why it's so captivating. The character or Celia is there I think firstly to show that Shriver can write a vulnerable character and draw lines of real familial love through through novel in contrast, but also so that we can truly see the depravity of Kevin. Shriver is bold in this, creating something beautiful amongst chaos only to burn it down.

I really don't want to write anything more about the content itself as it's so brilliant I feel it should only be expirienced first hand. I will say however that I truly loved every little piece of this story and that i'll defiantly be reading more from this author.