"A reader lives a thousand lives before he dies. The man who never reads lives only one."

I was going to undertake the rather mammoth task of reviewing all 5 of the currently published books in the Ice and Fire series in one post...but to those who haven't read it, it would be impossible to do without ruining the plot of further books. So instead I'll go into the main plot of the first novel in the series for those who want to know more about what the story it's self is about, and then I'll discuss the series as a whole at the end.

I confess it was HBO who turned me onto the series, Sean Bean in anything is going to be my cup of tea but Game Of Thrones especially is just an amazing show, and after watching series 1, I had to find out how the story continued so I picked up the novels. 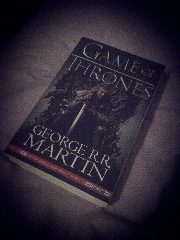 The books take place in  the Seven Kingdoms of Westeros, a fictional land similar to medieval Europe which in the first book is mainly separated into two areas; The North And The South. Though the whole of Westeros is ruled by one king, Robert Baratheon, he resides in the south. There is a man titled Protector of the North who acts in the Kings place in those lands, Eddard Stark.

In each progressing books more and more "main" characters come into play, but in the first, A Game Of Thrones, the main characters surround these two men; Baratheons wife Cersei Lannister and her brothers, Jaime Lannister, a member of the Kingsguard, and "The Imp" Tyrion Lannister, as well as Cersei's eldest son Joffrey Baratheon.

Eddard Starks family are also major characters; his wife Catelyn Stark, his bastard son Jon Snow (bastards in the kingdoms last names are given in juncture to where they were born, e.g. Snow for the north, Rivers for the riverlands), some of his other children Rob, Sansa, Arya, and Bran, and his ward Theon Greyjoy who he took from the Iron Islands as a boy. Other main characters in the Stark family are their "pets". The sigil of house Stark is the Direwolf. Each of the children, including Jon, have a Direwolf for a pet.

Eddard is appointed Hand Of The King, and must go to the south, to Kings Landing to serve for Robert. He takes his two daughters with him; Sansa who dreams of Princes soon fancies herself in love with Joffrey Baratheon and a betrothal is formed. Arya however dreams of archery and sword fighting...

There is a place in the north where Westeros comes to an end at the foot of a great wall made of ice, The Wall is manned by The Nights Watch, which Starks bastard son Jon joins. The brothers of The Nights Watch must vow to dedicate their lives to the wall, which they man in hopes of protecting Westeros from what lies beyond it.

Across the seas in the east there are two more major characters, Viserys and Daenerys Targaryen. Their father, the "Mad King" Aerys Targaryen sat the Iron Throne prior to Baratheon, who won the seat during war. Aerys son Rhaegar kidnapped the woman Baratheon loved, Eddard's Sister, Lyanna Stark. When Eddard's father and elder brother asked Aery's for Lyannas return he executed them, leading the north into an uprising in which Aerys murdered Rhaegar's infant children, before Jaime Lannister killed him, earning the title of "The Kingslayer". Baratheon murdered Rhaegar himself after Lyanna was killed, and Stark and Baratheon were left to claim the throne. During the war, Viserys and his pregnant mother fled to Dragonstone where one night during a violent storm she gave birth to Daenerys, who was given the name "Stormborn". Their mother died during the birth and the two children fled east where Viserys became known as "The Beggar Prince", using his family name and his idea of being the rightful heir to the throne to secure homes and allies for he and his sister. Viserys, tired of waiting for his throne sells his sister to a Dothraki horse Lord in exchange for an army to take to Westeros. The Dothraki are savage tribes who worship horses and roam the lands in the east pillaging for their city of Vaes Dothrak. Daenerys and her intended, Khal Drogo surprisingly form a real connection, and fall in love, much to the ire of Viserys. 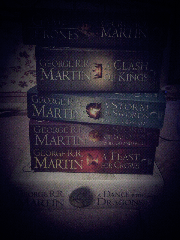 That isn't nearly all of the plot of the first book in the series but to those who haven't read it, I hope it's enough to make you want to pick it up. As you can tell from the rather heavy description above, there is a lot of plot to these books, I was reading a review by Joshua Chaplinsky the other day over at The Cult which pretty much summed up what a heavy read the series can be;


"For those looking to dip their toes and test the waters- you're gonna get your foot bit off. If you are lucky enough to recover it, you can keep it in a jar as proof of the encounter, hobbling around with a smile on your face, content in knowing this is only the beginning."

This series was really my first foray into medieval fiction and I have to say I was absolutely enthralled by these books. First off Martin is just an absolutely beautiful writer. He writes with real complexity and intellect, in that everything is researched down to a T; the writing really feels authentic, and he has so many characters, none of whom really feel like any of the others. What I mean by that is, you start reading a chapter from Daenerys and you absolutely know it's her, not any of the other number of female protagonists in the book. That's what's really astonishing to me, how many main characters there is by the fifth book, and each of them with their own distinct personality and voice.

Something else I really admire about Martin is that he's really not afraid to kill off any major characters. With most books you form an attachment to a certain character/s and because they are such a huge part in the story you feel some security in thinking that they can't be killed off: they're too important, well, Martin smashes that theory. There have been several, weak (and short) moments for me while reading this series where I have exclaimed that I simply can't read any more, because I couldn't stand the thought of loosing another important character.

Martin has definitely fleshed out a very realistic Westeros for us to explore and I really recommend that you do so. I for one feel like this is a series I'll be going back to and discovering more things about for many years to come. The sixth book in the series, The Winds Of Winter is thought to be out next year. An excerpt from the book can be read here.

Email ThisBlogThis!Share to TwitterShare to FacebookShare to Pinterest
Labels: 1990's, A Clash Of Kings, A Dance With Dragons, A Feast For Crows, A Game Of Thrones, A Song Of Ice And Fire, A Storm Of Swords, Fiction, George R. R. Martin, HBO, Medieval, Novel, Review, The Winds Of Winter