My Take On The Erotica "Boom" 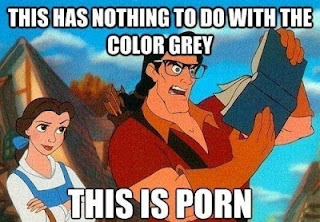 I've read so many articles on this subject recently and have wanted to chip in with my two cents. I've been wondering whether to write this post for a while because it's not a review and I don't want to offend anyone that's either under-age or has read the books I want to talk about and enjoyed them. If that's the case with you, I'm sorry, I really don't want anyone to feel uncomfortable or like I'm preaching or saying what they enjoy is ridiculous so if you don't want to read this post that's completely fine, I have lots of other posts on this blog so please read and enjoy one of those instead.

"When an eager and curious Jane Eyre arrives at Thornfield Hall her sexual desires are instantly awakened. Who is the enigmatic Rochester whom she instantly feels attracted to, what are the strange and yet captivating noises coming from the attic, and why does the very air she breathes feel heavy with passion? Only one thing Is certain. Jane Eyre may have arrived at Thornfield an unfulfilled and tentative woman, but she will leave a very different person…"

My first problem; How unbelievably lazy for this author, Eve Sinclair, whose bio on her publisher's site paints her as a huge classics fan:

"Eve Sinclair first fell in love with the novels of Bronte and Austen at an early age and later went on to study English Literature at University. She has since worked as a copy-writer, journalist and editor and now divides her time between her shared passions of tending her English garden and travelling extensively abroad."

I bet she travels extensively! All she had to do was add a few passion filled sentences and mention Jane's burgeoning womanhood and hey presto! Pan Macmillan have well and truly cashed in on the erotica trend sprung up by 50 Shades, already selling nearly 10 million copies worldwide. I must state here that it's not the genre I have a problem with, if a person wants to read erotica that is completely up to them and I see no harm in it. Neither do I have a problem with the books being so prominent at the minute, no one should be ashamed of their sexuality and I think this trend has brought to the forefront that women are just as sexual as men and that it's finally being accepted without women being deemed as "sluts" for embracing their sexuality. The thing I have a problem with is that the books that are the most famous and started the trend, 50 Shades of Grey, are quite probably some of the worst examples of writing to be published in a long time.

There are so many errors in the books you've got to wonder if they were copy read at all; the publishing house is staffed by 3 proof readers and 11 editors, but where the hell were they when this manuscript was brought to their office? I have read about mistakes ranging from a complete and utter lack grammar;

intense, bright grey eyes that regard me shrewdly."
To misspelling;
"sandles"
And some fantastic one liners including;
"his eyebrows widened"
"a glass of white Pinot Grigio"
And
"I'm not interesting in that."

As well as the writing being unbelievably repetitive; Characters "Murmur" 199 times in the first book alone, They "Clamber" 21 times, The female protagonist says "Holy Cow" 82 times, "Jeez" 81 times,  frowns 124 times and blushes 124 times. Someone send this woman a thesaurus. 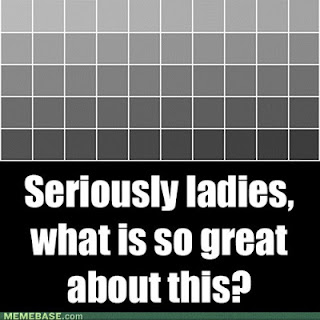 I really do wonder how this book has sold over 36 million copies when it's writing is so lazy, I also have to mention the fact that the story was originally written as Fan Fiction for the Twilight books, does that not creep anyone else out? That this woman sat and wrote erotica about minors and then managed to publish it by changing only the character names? Again, how lazy! Does no one write their own plots any more? Or have these writers just lost all of their integrity and decided re-writing is the way to cash in?
Another problem I have is that the books claim to be about the BDSM culture and many articles and views from readers say that the books have brought this culture into the open and made them want to try new things. Firstly I think we should all remember here that the author is not a member of the community herself and is said to have done all of her research on the internet, therefore her depictions of acts may not be correct or safe. Secondly, from my understanding the couple in the book participate in being tied up and spanking. Tied up and spanking. And that's BDSM? Also the girl who takes on the role of the submissive in the books is constantly leaving, crying, or pulling out of her "submissive" role, I can understand how people who are actually participants in the community are so annoyed by this depiction of their lifestyle as it's treated like a fantasy or a whim, when for them it's something their lives revolve around.

It's recently been announced that the books are to be adapted into a film. Brett Easton Ellis was one of the writers who put themselves up as candidates for the screen play, and at reading this news I thought "Well, thank god, if they have a decent writer it might turn out okay, more of a satire, something with a little more depth". But did Ellis get the rights? Despite the fact he has just written The Canyons with Lindsay Lohan and Porn actor James Deen, and therefore would have some experience in this role, the rights have gone to Kelley Marcel; a Brit who's never written a feature before!

To everyone who has read and enjoyed these books; like I said I don't mean to offend, these are just my opinions. To those who haven't read them; the erotica industry is huge and I'm sure if you look harder than the Amazon recommendations you'll find something that has a lot more depth and a lot less mistakes.

Juli at Universe in Words has written a post on the collection of essays "50 Writers on 50 Shades of Grey" which is well worth a read if you'd like to read more on this topic.