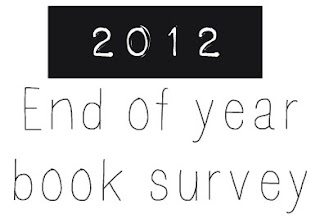 1. Best book you read in 2012? (You can break it down by genre if you want)
We Need To Talk About Kevin - Lionel Shriver

2. Book you were excited about and thought you were going to love more but didn't?
The Hunger Games Trilogy - Suzanne Collins. I got the first two books from the library and have the third but haven't managed to finish it yet. I do't know about this series - in theory it sounds great and I think I just wasn't in the right frame of mind to read it at the time - maybe a re-read in the new year.

3. Most surprising (in a good way!) book of 2012?
The Fault In Our Stars - John Green. Surprising because I had thought of Green's books as very same-y with plots just trying too hard, but I did like this one, very heartfelt.

4. Book you recommended to people most in 2012?
WE NEED TO TALK ABOUT KEVIN - Lionel Shriver - GO GO GO!

5. Best series you discovered in 2012?
I'm cheating because this was last year but, A Song Of Ice And Fire, because I haven't read any others this year!

7. Best book that was out of your comfort zone or was a new genre for you?
I suppose it was The Fault In Our Stars again because I don't read that much YA.

9. Book you read in 2012 that you are most Likely to re-read next year?
Like I said - probably The Hunger Games Trilogy.

11. Most memorable character in 2012?
Jon Snow, you beautiful wolf you!

12. Most beautifully written book read in 2012?
I'm really loving Virginia Woolf's writing at the moment, so probably To The Lighthouse.

13. Book that had the greatest impact on you in 2012?
We Need To Talk About Kevin - Lionel Shriver

14. Book you can’t believe you waited UNTIL 2012 to finally read?
Palo Alto - James Franco! I've got it on good authority that this will be under the Christmas tree for me!

15. Favourite passage/quote from a book you read in 2012?
I can't answer this! There are far too many!

17. Book that had a scene in it that had you reeling and dying to talk to somebody about it (a WTF moment, an epic revelation, a steamy kiss, etc.) Be careful of spoilers!
THE RED WEDDING. (A Storm Of Swords - GRRM)

18. Favourite relationship from a book you read in 2012 (be it romantic, friendship, etc):
I tried to steer my mind away and think of something else...but if I'm going with my heart, it's got to be Jon & Ygritte.

19. Favourite book you read in 2012 from an author you read previously:
Damned - Chuck Palahniuk.

20. Best book you read that you read based SOLELY on a recommendation from somebody else:
Perv: A Love Story- Jerry Stahl, recommended over at The Cult.

Book Blogging/Reading Life in 2012
1. New favourite book blog you discovered in 2012?
I reallllly like A Literary Bunny, A Bookworm Belle, Soon Remembered Tales, Devouring Texts...and many others!

2. Favourite review that you wrote in 2012?
Oh god, I don't know, I'll go with (again) We Need To Talk About Kevin because  wrote it at 8am after staying up all night to read it and my hands were shaking I was so excited about it,

3. Best discussion you had on your blog?
Quite a few people got involved with my 50 Shades post!

4. Most thought-provoking review or discussion you read on somebody else’s blog?
*Worst memory* I have no clue! I've read a lot of new blogs this year and they're all great!

7. Most popular post this year on your blog (whether it be by comments or views)
My Autumn Wishlist, oddly!

8. Post you wished got a little more love?
I'm happy with any amount of readers or comments - one view on a post means just as much as 100

9. Best bookish discovery (book related sites, book stores, etc)
All of the rest of the amazing book blogs that I read, you're all smashing and I love to read what you write.

10. Did you complete any reading challenges or goals that you had set for yourself at the beginning of this year?
No! Next year definitely!

2. Book you are most anticipating for 2013?
I'm really hoping for a '13 release for The Winds Of Winter!

3. One thing you hope to accomplish or do in your reading/blogging in 2013?
World domination, and a proposal from James Franco of course.