Finally a book post! If Only It Were True - Marc Levy 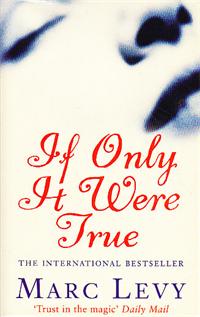 We've all been in that place where Russian literature, dystopia and other highbrow subjects are just a little too much and we need our minds to turn off a little while we read. This is what I thought I was getting with Levy's If Only It Were True. I picked the book up in a charity shop for something ridiculous like 50p because the name struck a chord and that's usually how I buy my books. When I got home and looked up the title and author I realised it was because had seen the Hollywood adaptation, which from the book is a big leap. The film I'm talking about is Just Like Heaven, a noughties rom-com staring Mark Ruffalo and Reese Witherspoon. Witherspoon is a ghost and they fall in love, all very Patrick Swayze with the pottery table. I can only assume that they changed the title of the film so that the could play The Cure song of the same name so many times throughout and get away with it. If you've seen the film you're probably thinking, "wait...that is just a story you can tune off with" bear with me! I swear the book has more depth.


"A young San Francisco architect returns to his apartment after an exhausting day. Relaxing in the bath, Arthur hears fingers snapping in time to the music on his radio. He traces the noise to a closet, where, to his surprise  he finds an attractive young woman. Thinking she's part of a practical joke, he asks her to leave. But Lauren, stunned to discover that Arthur can see and hear her , reveals the extraordinary truth. Six months earlier; she was in a car crash; her body now lies in a hospital bed, in a coma. Initially sceptical, Lauren finally proves to Arthur that what she had said is true. But when the Doctor's decide to turn off the machines keeping Lauren alive, Arthur must find a way to save her. For it is only her that can save him..."

Okay, that actually sounds a little too...fairytale (how on earth did I buy this based on that blurb?!) but I promise, the story is better. It's written in 3rd person which is not my favourite but I think fits with the other worldly, supernatural themes of the story. The characters are likeable and well written and by the end you really are invested in their relationship - whether its real or what we're used to or not.

Levy is a French writer and the book was translated into English but I never really get a "translated " feel which I sometimes do - the words aren't stunted and everything flows really nicely which is great because at only 216 pages, it's not a book you really want to be reading over a long period of time.

A perfect comfort novel for this winter-y festive season, and OK yes I'll admit it, this book is something I claim to never like; a love story - a real sickening emotional love story - but hey, If I can like it then I'm sure it must be one of the good ones.

That's (probably!) me away from this screen until after the 25th! I want to do nothing but watch Christmas films, read comforting books and to eat, eat, eat this week, but should I (I have a sneaking suspicion that I will...) get any books for Christmas, I'll do a little haul post on them sometime after. Merry Christmas everyone and thank you all so much for reading my little corner of the blogosphere, I've had over 3000 page views now and every single one of them means so much. Have a happy holiday one and all!