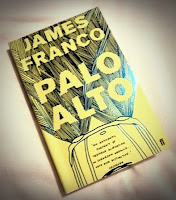 I got this book for Christmas  and after having it on my "to-read" list since its release, it was a great thing to tear away the wrapping paper and have this book be revealed. Undoubtedly, I wanted to read this book for...several reasons. The first being; This man has been schooled in writing by some of the best minds in teaching right now, and he's got writing degrees for four separate colleges; I wanted to see what kind of writing he was publishing. But, also I won't lie, he's damn pretty and I love any movie with him in so...I'm a little pre-disposed to love anything he's written/said/acted in...you get the picture, heart eyes all round.

Anyway, I was interested to see whether I would passively like the book because of its author, or love it because of it's content, and...I really did love it.

Palo Alto is a series of short stories from teenagers growing up in the Californian city. These stories range from teacher-student relationships, car accidents, sexual abuse, buying guns, finding bodies...all sorts. Some of the characters feature in more than one story, some may feature in more but you aren't introduced; they are all 1st person and you feel as immersed in that characters world as Franco wants you to, in other words, if they don't give a shit about who surrounds them, you don't need to either, because they aren't named, described or important.

Every story is different and I think Franco's done a great job with giving each one a voice and a different tone. On the blurb it reads;

This book is to be inhaled more than once, with delight and admiration, with unease and pure enjoyment.


And that's definitely the case. With some of the stories I felt a sense of dread that almost kept me from turning the pages, and although nothing bad ever actually happens, you do sometimes get the feeling that if there were just another page or two, then it definitely would. The endings are all very subjective, and in your mind you can take them wherever you want to which I think was a great writing choice, especially for a first novel from a first time writer, his voice is strong but not overbearing, giving a really easy read with a lot of underline emotion and style.

I'm definitely glad I got to read this book and think Franco has a brilliant future ahead of him with his writing. For the under assuming - flip to Yosemite, Jack-O, and Lockheed, a brilliant range with a lot of depth.