The Crimson Petal And The White - Michael Faber 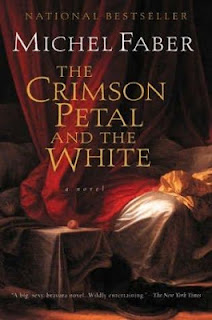 It has taken me a while to finish this book. I think this is a combination of my recent wish to do absolutely nothing, and the fact that this book is damn long. I finished last night at about 4am after deciding enough was enough, and finally pushing myself to get to the end. Despite all this though, I did really enjoy this book.

The Crimson Petal takes place in 1800's London, and is primarily about prostitutes (If you're thinking 'Ugh, another Ripper novel?' Then worry not, it's before his time.) Fanciful cuckold William Rackham, though long since a man, is still of a mind of a University student. He refuses to take over his fathers perfumery and soaps business  preferring instead to scribble meaningless prose in hopes of one day being published and announced the greatest writer that ever lived. Poor Williams life is troubled, in that he refuses to accept in life anything other than the social construct of "normal", unlucky then considering his "mad" wife Agnes who is a constant source of aggravation and worry. William, however has a lucky run in with a prostitute named Sugar, who is not only a match for him in wits and knowledge, but has the utmost faith in him and his abilities. With Sugar's backing, William takes over his fathers company, is awarded with more riches than he could of dreamed, and is in the high graces of the majority of the London gentry. A happy ending. Well, not quite.

You see, this story is not William's or Agnes's, but Sugar herself's. Forced into prostitution by her mother while only a child, Sugar is rightfully dissolusioned with life, which she tries to make justifiable by using her 'experiences' for the basis of a novel, which she believes will shine a light on the true life of a prostitute. William however offers Sugar a way out. By taking her as his paramour and installing her securely in his life, Sugar is no longer the girl to be spat at and propositioned in the streets, but a lady. A place in life she'd rather die than loose.

I think what I like best about this book is that it was written by a male, as it contains so much contempt for that sex. Men in this novel are cruel and snivelling little beasts, who take what they want and throw away whatever possession is no longer deemed useful, even if that 'possession' is a human being.

You are rooting for Sugar the whole way through the 800 or so pages, and although the story veers for her in a way you'd not imagined, the ending is so clear to the reader and you sit, devouring the words with baited breath, praying for this characters happiness, in whatever way, even if you feel like a traitor to the rest of the story for accepting one so quickly as it's clearly such an unlikely turn of events.

I'm rambling but I really don't want to give anything away because the ending is just so lovely. Please read this book if you get the chance.