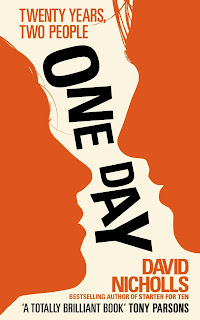 One of those charity shop books that you buy because you went into the shop with high bookspectations (I'm coining that) and were let down. Basically, I wanted to buy something, and I'd heard of this. Let's just say I'm glad I got it cheap because I don't think it's worth its printed price.

One Day is the loooong and arduous story of Emma and "Dex" and their friendship as they grow from students into middle age. When I first started reading this I was actually quite caught up as the first chapter takes on the pairs graduation night, and I myself am rapidly approaching that phase of my life. But, it all went downhill from there.

The most important thing in a novel for me will always be the characters and their development, because if I don't care about the characters then why am I reading the book? I'm not emotionally invested and therefore nothing that happens can make me care, and unfortunately this book really lacked good characters.

Strangely enough, I did quite like the character of Emma at times, though I did feel the author made her a little too confused and that she lacked direction. I say strangely, because the author is male, but; in this book anyway, he seems to make a much more relatable connection with his female characters. The character of Dex is one of the worst I've ever read. He had no redeeming qualities whatsoever and I actually really wanted something awful to happen to him just so there'd be some development. Sadly though, he stayed his awful, aggravating self throughout the whole of the novel, and - *SPOILER ALERT*, Nicholls kills off the wrong character. He ends Emma's time in the novel at about 3/4 of the way through, just as the couple finally decide to be together romantically, which I just can't understand. I thought at that point that this was going to be the point of Dex's character progression because he's have to adjust without the emotional crutch of his best friend and lover, but no; HE STAYED THE SAME. Did you get bored halfway through writing Nicholls? I mean, I honestly can't understand why this book got published. (And became a bestseller?!)

I have however seen this type of story done well. Cecilia Ahern's Where Rainbows End has this same type of story arc: two young friends who grow older and are separated by thousands of miles, other relationships, family hardships, and still manage to come together in the end. If you ever consider buying One Day, please put it down and seek this out instead - you'll be much happier when you turn the last page, trust me.

I know there's an adaptation with Anne Hathaway but I don't even think she could redeem this story for me, we've gone too far together now.